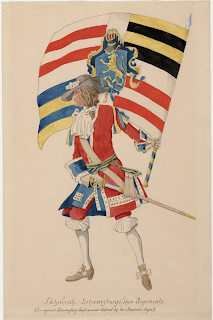 As I have noticed that most of the interest now goes into the facebook page on 1672, I decided it was time to post something here again.

The above plate is one of a series of plates from the collection of Gustave de Ridder, a French collectioneur of military artwork. These plates can be found in the BNF in Paris, the Anne Brown Collection in the USA and the Dutch Army Museum.

This one, showing an ensign of the Frisian Schwartzenberg Regiment according to the text, looks like a copy of another plate made for the dutch miitary historian ten Raa. The plates were made late 19th century/early 20th century by a Czech or Austrian  historian called Norbert Robitcheck "after earlier plates", so are not originals. (Info from the late Dr Jean Belaubre and Yves Roumegoux). Dr Belaubre was a firm believer in the authenticity of the depicted uniform colours and flags but I still have my doubts.

I this case the Schwartzenberg zu Hohelandsberg banner is depicted wrong as it is turned 90 degrees. You can take a look at Andre Buwalda's website here, for more info on the family.

I also have great doubts about the yellow/black and red/white parts and the Frisian lion is a bit different than the Holland lion. It might be Robitcheck took his info from German Adelsbuche where indeed a very old Bavarian (!) Schwarzenberg Wappen is decribed with black, red and gold. (On google books a lot of Adelsbuche and German heraldry books can be found).  Robitcheck did the same trick with the Beveren flag, in which he mashed up the heraldry of the German Bevern and the Dutch Beveren.

So I am not convinced about the authenticity of the flag.