On September the 22nd in the Royal Dutch Library, The Hague, a congress is held on the year 1672, organised by the Studygroup "The Friends of de Witt". Among the speakers 1672 experts Luc Panhuysen and Judith Brouwer.
Arjan Nobel speaks on French terror on the countryside, and there is a lecture on Romeyn de Hooghe.
(costs around 15 euro's, depending on membership)
LINK HERE!
Gepost door Rampjaar op 09:34 Geen opmerkingen: 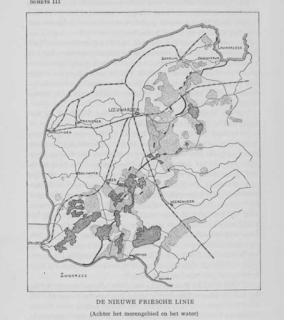 This is a great book on the fights in the tree Northern Provinces in 1672 and 1673, available free on great Delpher website. It delas with the Frisian Water Defence line, troop strengths, strategy
and gives a lot of praise to Colonel Aylva. 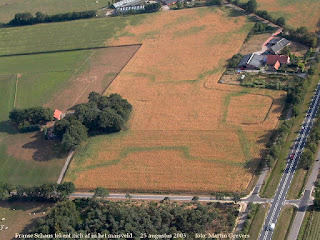 It's very warm and dry in the Netherlands now, and in the news in the past days were drone images showing very interesting archeological sites.

More info on the fortress line around Grolle here 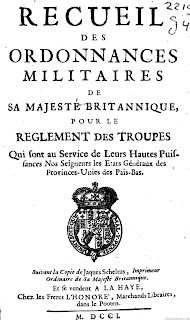 A year 1700 book on orders and regulations for the Army of King William III. March orders, musket fire, clothing, penal stuff and the like. Of interest the musket orders, which seem to be quite old as they imply a matchlock musket. 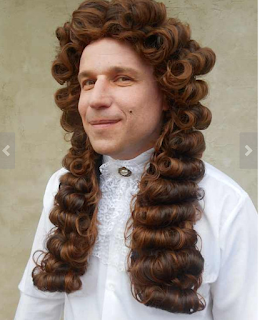 There are some celebrations planned to commemorate the year 1672, and I am busy with a 1672 outfit. Of course you need a wig, and the above one comes from a Chech wig maker. Original wigs are a bit pricey to say the least, and real hair or fur ones are quite expensive.


If you haven't been at the Fortress of Bourtange, you have to do with pictures and movies like this one. And yes, it really looks this was, there are several museums, also dealing with 1672 and every year there's a re-enactment of either a 80 years war battle or a Napoleonic one. 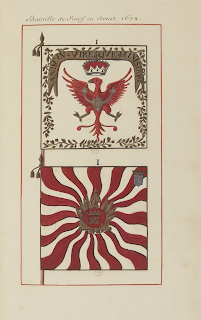 On Gallica you can find a copy of the book that describes the various flags that were captured by the French during Louis XIV reign (there is also a Louis XV version).

It doesn't contain a description,of the flags so you have to have either the excellent Robert Hall CD, or the earlier works by Dr Jean Belaubre.

I can tell you though that the second flag above belogs to regiment Aylva, and was captured at Seneffe.


There was a time that dutch national TV had some very mellow programs on history, like this one on the fortress city of Naarden. A lot more of them on youtube. Check for "Ontdek je plekje". 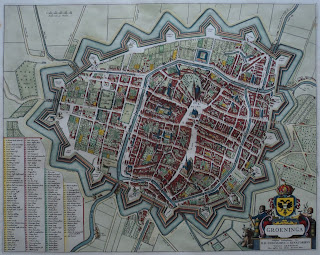 On this day in 1672, one of the shops/workplace of map maker Johan Blaeu, at the Gravenstraat in Amsterdam, goes up in flames. Fortunately his other shops were saved.

Above a Blaeu map of the city of Groningen, with the 'new' fortifications. The city walls were kept intact until deep in the 19th century, when they were considered obsolete. The walls were torn down, the ditches were filled, and only from abiove you canb see where once the proud walls were standing. The many city gates were demolished, except for one, which is now in the Rijksmuseum collection.
Gepost door Rampjaar op 09:22 Geen opmerkingen: