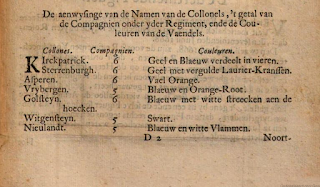 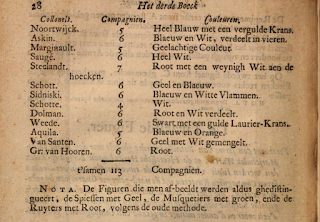 From the Boxel Manual. also a short description of Regiment Flags, like the one of the (Scottish) Colonel Kirckpatrick: Yellow and Blue, divided in four. It was also possible that "Figures" were placed on the flag, like yellow (pikes or pikemen), green musqueteers or red horsemen.

Also very likely would be a Province Weapon showing the paymaster, in the left upper corner. 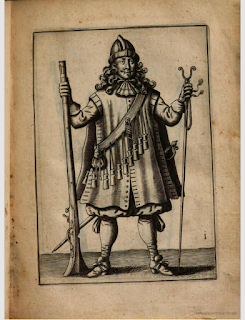 Well, at last it is available on Google Books, "The Exercise of arms" by Johan Boxel, Capt. Lt of the Colonel's Compagnie of the Holland Guard Regiment, with some nice plates in it, showing  somewhat dated looking musketeers and pikemen. Some of them are already wearing "long" doublets though.


As some of you may know we are also active on Facebook, which greatly improves the interaction with others interested in this period. I have also noted some real problems with the Blogger format lately. 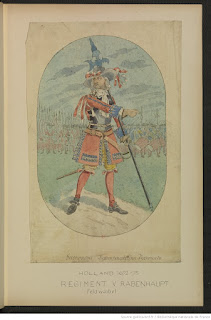 Anyway, on the facebook page we already posted a link to a book in the BNF on dutch uniforms in 1672. As you can see, "these are copies after originals", but I have never seen the originals, and some of the captions are plain wrong. So handle with care..

THIS is the link to the full manuscript. (Click on the word THIS) 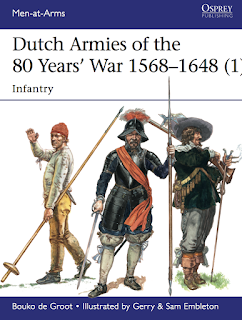 Of course, there is a gap of over 25 years between the 80 Years War and 1672, but at last Military Publisher Osprey managed to publish a rather excellent title on the subject, by author Bouko de Groot.


The first volume has been published now, and the second one is in the making. On Facebook, mr de Groot has set up a special page on the book, and the 80 Years war in general. Search on FB on "80YW.org", click this link.

The link to the book on Osprey's  website is here . 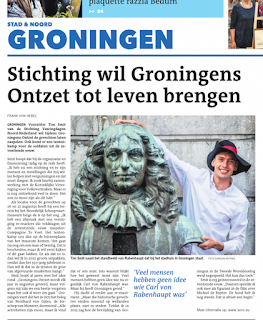 This is great news! At last some re-enactment on Groningen 1672. Of course we will follow this project very close.


Dutch television made a rather nice program on the succesfull attack in 1667 on the English fleet during the second Dutch-Anglo wars.

Symposium at the Loo Palace


The Williamite Universe is organising  a political historical symposion on the Glorious Revolution.


Summer 1688. Stadtholder William III is preparing an enterprise at the Palace Het Loo that was to change the world. In deep secret he is organizing an expedition to England. That fall a Dutch fleet of about 400 vessels will cross the North Sea and landed some 17,000 troops on the southern coast of England. The following winter William would play a main role in the ‘Glorious Revolution’, a ‘bloodless’ power shift that forged England into a parliamentary monarchy with William and Mary on the throne.

William’s reign not only transformed England constitutionally, but parliament became a representative power; a revolution of global importance occurred in government financing; religious tolerance was obtained by law; and a free press was allowed. England was set on a path of political stability, growing prosperity and innovation that ultimately resulted into the Industrial Revolution that spread and gave Western European economies a significant lead over other regions.
T
his one-day symposium at Palace Het Loo on May 15th, 2017 will focus on William and the Glorious Revolution. Four historians will speak and discuss the initiation of the revolution, its course and the ultimateeffects for England, Europe and the world of today.

Steven Pincus, history professor at Yale University, CT, USA has
specialised in English and European History of the 17 and 18th century. With his book ‘1988, The First Modern Revolution’ Pincus has drawn renewed attention to the importance of the Glorious Revolution.

Tony Claydon, history professor at the University of Wales, Bangor, UK. wrote a pioneering book on the Glorious Revolution and is biographer of the King-Stadtholder William III.
David Onnekink is lecturer and researcher at the University of Utrecht, who specialises in international relations in the early modern age.

Johan Carel Bierens de Haan , former Chief Curator of Het Loo Palace. From 2005 to 2010 he held a professorate in heritage at the Free University of Amsterdam
The moderator will be Fred de Graaf, former mayor of Apeldoorn and former Chairman of the ‘Eerste Kamer der Staten Generaal ‘.

The symposium will be organised by the Royal Apeldoorn Foundation in cooperation with Het Loo Palace and Utrecht University.
For information: c.penning@koninklijkapeldoorn.nl
Gepost door Rampjaar op 08:44 Geen opmerkingen: